Mission Springs Brewing Company opened its doors in October of 1996. The brewery is a 10 barrel brew house overlooking the Fraser River, in Mission BC. We brew beer that is true to style and satisfies our customers thirsty for quality craft beer that is true to form. We offer growlers, bottled and canned beer on location at the Mission Springs Pub, Restaurant & Liquor Store, as well as at many other fine establishments throughout the Fraser Valley & Metro Vancouver. Kegs of MSBC Beer is also available to be purchased in Kegs at the Mission Springs Liquor Store. Drop in for a Pint with a Delicious Meal & take home your Favourite Beer at the same time.

The brew house setup is comprised of a brew kettle with a combination mash/lauter tun, three open-top fermenters and three uni-conical fermenters. In addition, there are thirteen conditioning tanks for the ten+ beers on tap. We use a single temperature infusion mashing program to produce big flavour and wonderfully balanced beers.

FROM OUR BREW CREW

I fell in love with the process of making beer four years ago and have been homebrewing my own recipes ever since. I love the variety of beer that one can make and all the intricacies that go in to making it. 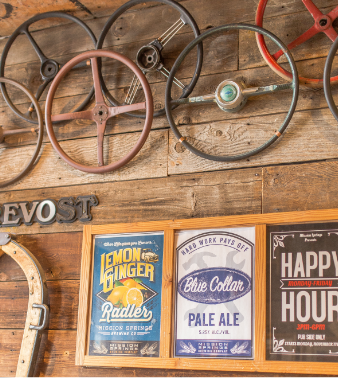 Our goal isn’t just to meet your expectations, but to exceed them through an inspired menu selection and phenomenal service.